Easy, Breezy, Workplace Romances: What To Watch After “Sh**ting Stars”

After eight weeks of humor, chaos, and romance aplenty, “Sh**ting Stars” has come to an end. While there’s nothing else precisely like this slice-of-life bird’s-eye view of the entertainment industry, a few dramas come reasonably close. In honor of Lee Sung Kyung and Kim Young Dae‘s adorable chemistry, here’s a round up of workplace romances where the two leads sizzle on screen. Give them a look below! 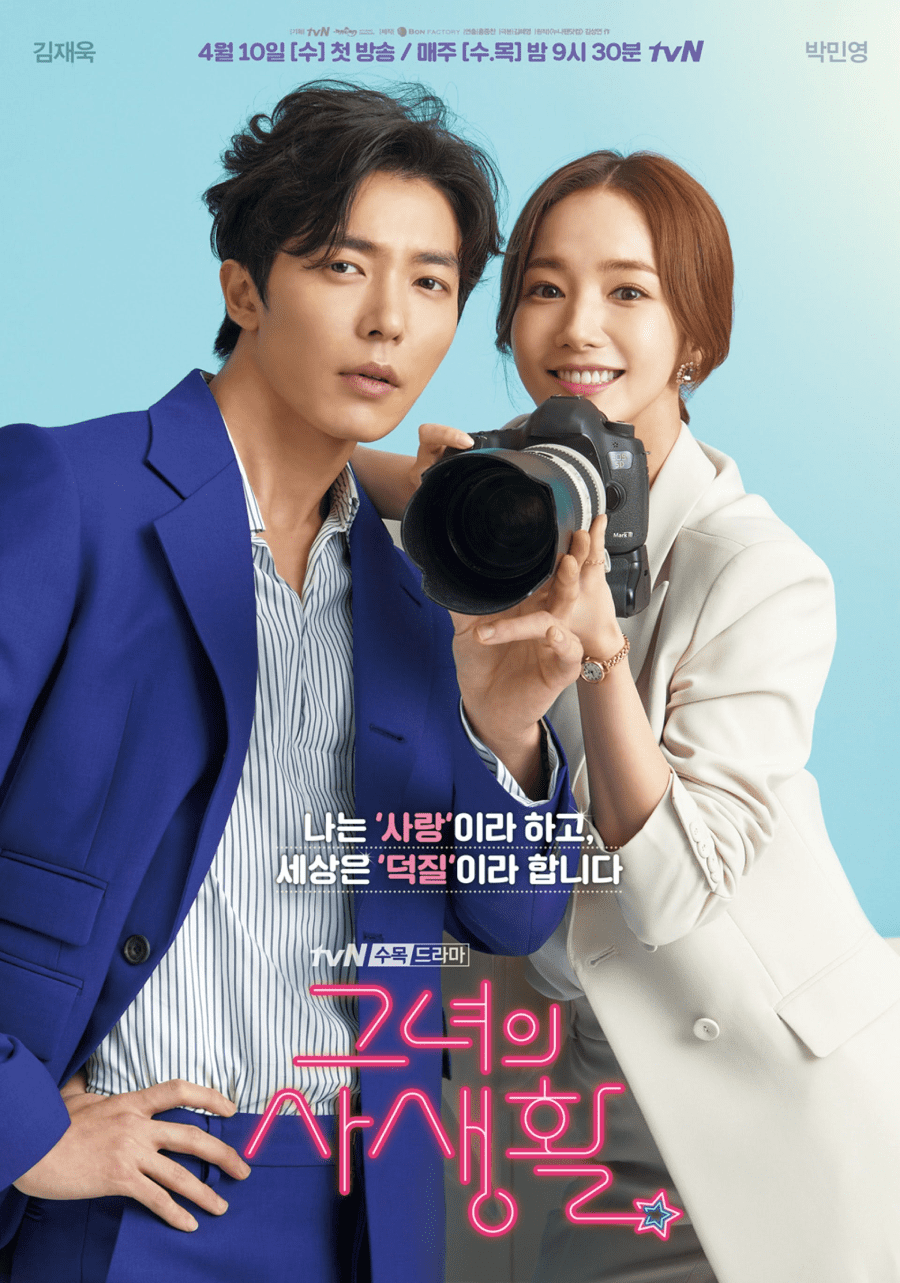 Sung Duk Mi (Park Min Young) is the classic career woman. Polished, talented, and stunning to boot, she’s the curator at a well-frequented gallery in Seoul. But Duk Mi has a secret, one that no one can find out. She’s a fangirl. And not just any kind of fangirl. An idol fan page manager who would do anything for her obsession: the mega popular Shi An (Jung Je Won). Duk Mi works hard to ensure that both spheres of her life remain firmly separate, especially since her boss is no fan of idols or idol fangirls. Yet, fate strikes when a work trip takes her to an auction where a painting by an artist Shi An likes is up for sale. To her dismay, Duk Mi is outbid by the handsome but cold art world genius Ryan Gold (Kim Jae Wook), to whom Duk Mi takes an instant dislike.

Their impressions of each other only worsen when Ryan is assigned as Duk Mi’s boss, and Duk Mi runs into Ryan in her fangirl disguise and nearly breaks his back. For his part, Ryan has no clue about Duk Mi’s double life but is both furious at and curious about the strange woman who fled from him and accidentally dropped her fangirl diary. He resolves to find her, but little does he know that she’s closer than he thinks.

Kim Jae Wook and Park Min Young. That’s it. Those are the reasons. Not only are these two amazing actors, but their chemistry is on fire! On paper, this drama isn’t the most highbrow of concepts, but these two elevate it to so much beyond that. Every second of them onscreen is a delight. Ryan isn’t one of those male leads who takes pleasure in being awful to everyone. He may be aloof, but he’s kind, sincerely apologizes when he’s wrong, and respects personal space. What’s not to love? 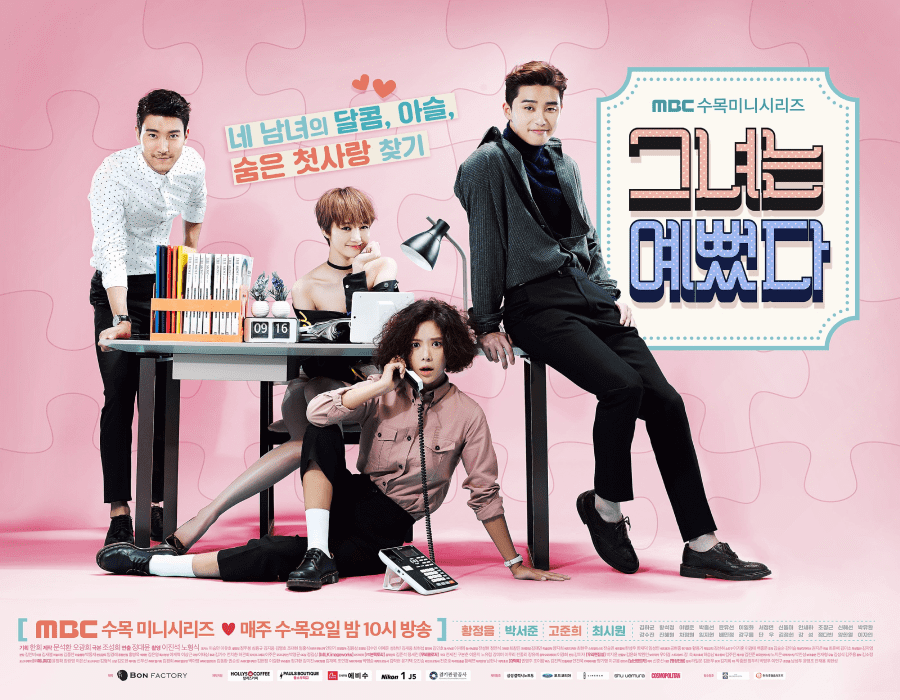 Fresh off the amazing “Kill Me Heal Me,” Hwang Jung Eum and Park Seo Joon reunited for this smash hit rom-com. Kim Hye Jin (Hwang Jung Eum) was the popular girl in middle school with a heart of gold. While others bullied Ji Sung Joon (Park Seo Joon) for his weight, she alone became his best friend. Sung Joon never forgot her even after his family moved to the United States and kept in contact for years. When he returns after 15 years to work as the chief editor of a fashion magazine, he longs to reconnect with Hye Jin and plans a date.

But Hye Jin hasn’t exactly been truthful for the past few years. Adolescence wasn’t kind to her, and she went from pretty to puffy-haired with really bad eczema. Fearful that she won’t live up to the girl Sung Joon has in his memory, Hye Jin sends her best friend Min Ha Ri (Go Jun Hee) in her place. What could go wrong? A lot. Hye Jin finds that Sung Joon is now her new boss. And Sung Joon doesn’t understand why his frizzy-haired employee reminds him so much of Hye Jin. As lies and misunderstandings start to pile up, only two questions remain. Just how much does beauty matter? And when do we move forward from the people we were?

As wonderful as Hwang Jung Eum and Park Seo Joon are, the real star of this show is surprisingly Choi Siwon who puts in a fantastic turn as the second male lead Kim Shin Hyuk. Unlike Sung Joon who is a jerk to Hye Jin, Shin Hyuk brings her out of her shell, encourages her to do her best, and roots for her every day.

There’s much to like about this show, but Shin Hyuk and his blatant affection for Jackson take the cake! 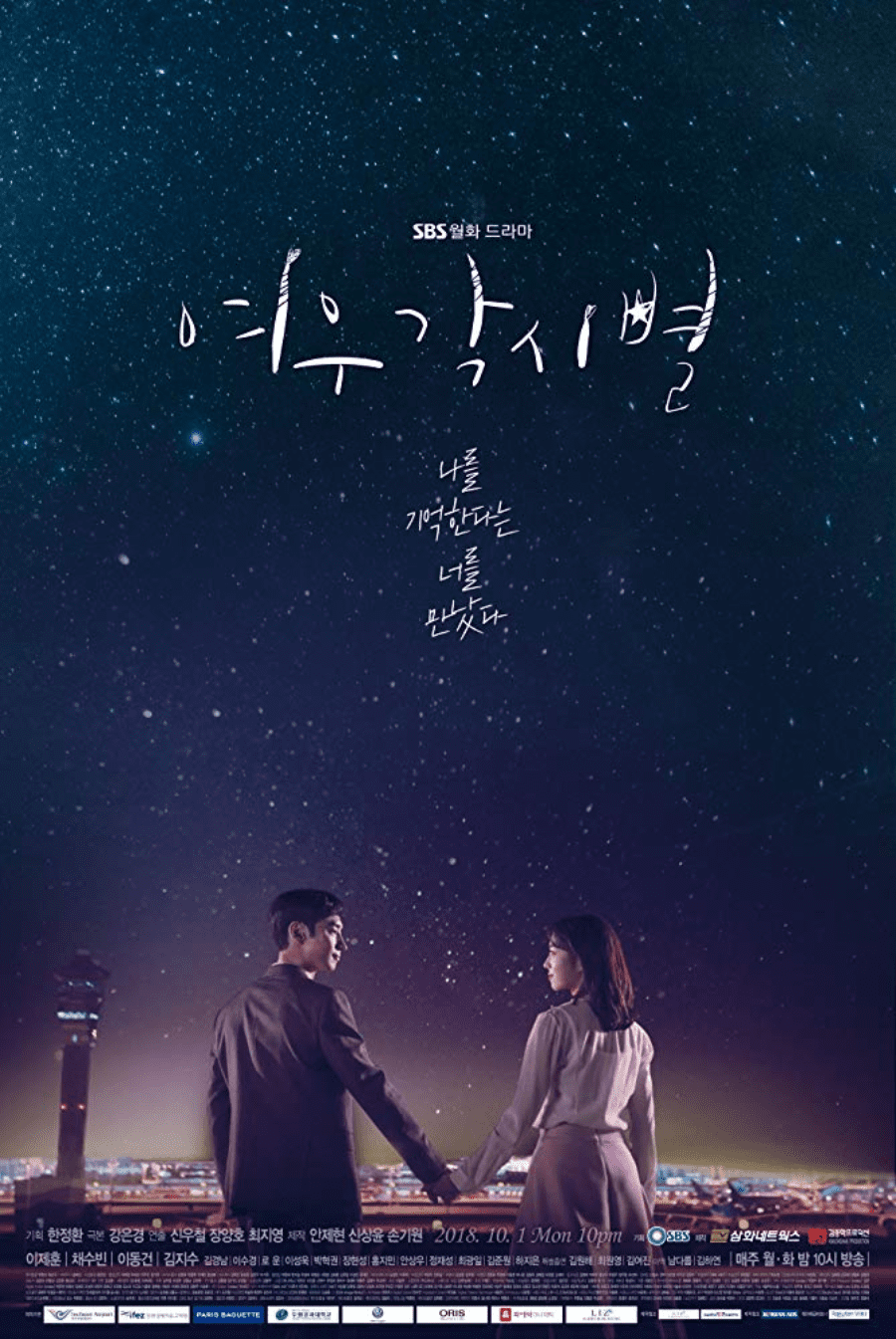 Han Yeo Reum (Chae Soo Bin) has just been transferred to the passenger service team at Incheon Airport after her hot temper gets her booted off two teams. She’s determined to make this job work, but her good intentions often result in more errors. Enter Lee Soo Yeon (Lee Je Hoon), the genius new recruit who is competent to the extreme. Soo Yeon keeps to himself and isn’t pleased when he’s partnered with Yeo Reum to prevent her from doing anything crazy. Yeo Reum is equally displeased at having to be watched over.

But Soo Yeon’s keeping a secret and when Yeo Reum inadvertently finds out, there’s no going back. Soo Yeon’s secret is dangerous, and to hide it, the man who seems to have it all under control will need to rely on the girl who cannot seem to control anything. Let the sparks fly!

Romances live and die by chemistry, and these two have it in spades! For all her headstrong attitude and clumsiness, Yeo Reum’s a ray of sunshine and the perfect foil to the quieter, more wary Soo Yeon. Add that to the fact that these two could romance a rock, and you have a winning combination!

Without giving away too much, the drama also deals with the very sensitive topic of Soo Yeon’s secret quite respectfully. It’s not something often dealt with in dramas, and it’s definitely worth a watch for that alone! 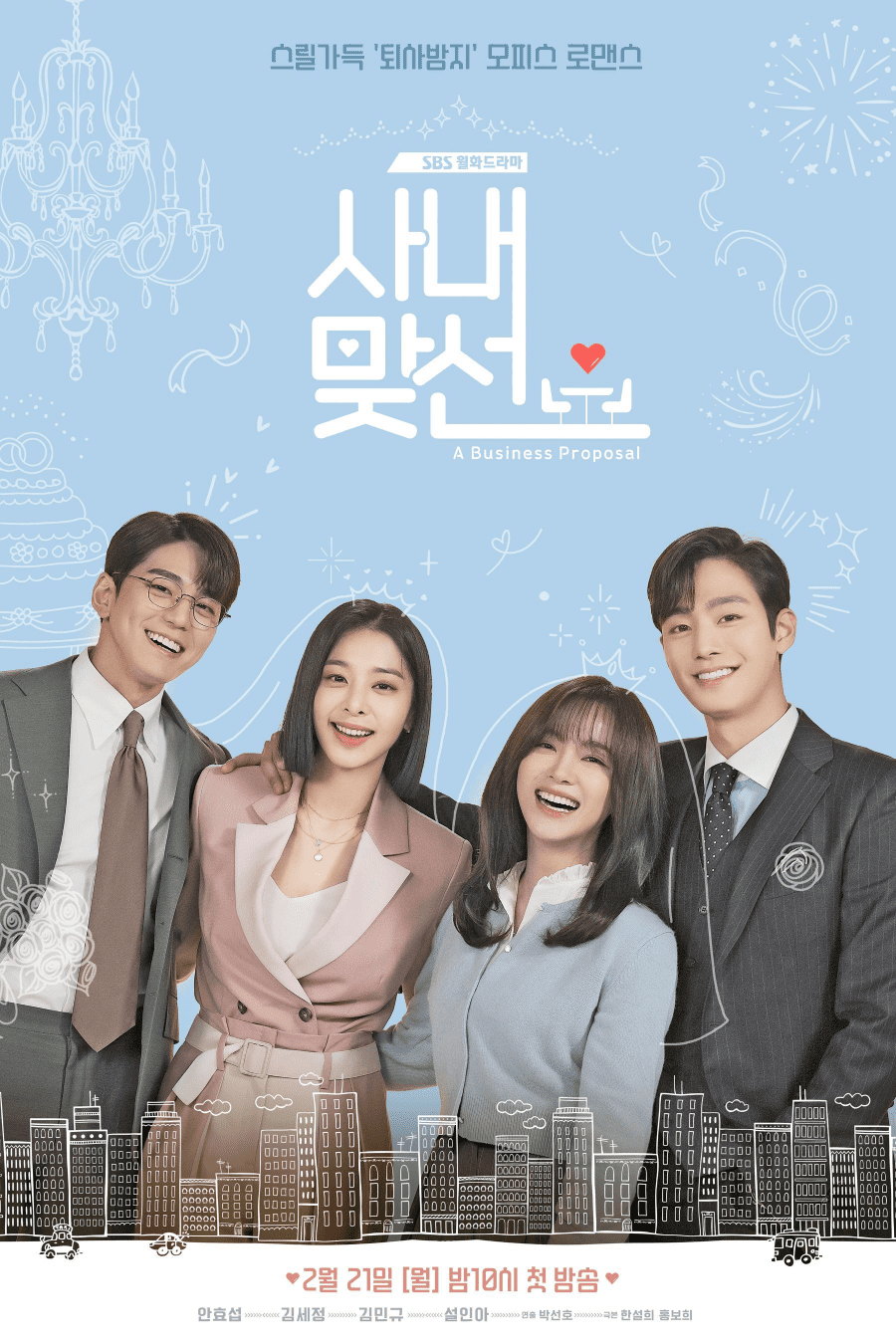 Shin Ha Ri (Kim Sejeong) has the best job ever as a food researcher for a reputed company. She isn’t as well off as her friend Jin Young Seo (Seol In Ah), the daughter of a chaebol family, but she and her family (who run a chicken restaurant) get by. Ha Ri also earns a little extra on the side by going on blind dates in Young Seo’s stead and ruining them for her because Young Seo has no interest in marrying for convenience. Only, as fate would have it, the blind date Ha Ri goes all out on ruining is with Kang Tae Moo (Ahn Hyo Seop), the new president of Ha Ri’s company. Worse, despite their disastrous date, he suddenly asks to marry her?

Ha Ri is suddenly shuttled into a double life, hiding from Tae Moo at work and pretending to be this glitzy rich girl at night. But how long can she keep it up? And what happens when she starts to fall for Tae Moo in turn?

The central romances are cute and all, but the sisterhood and the bromance are just so wholesome! Ha Ri and Young Seo have the best friendship, and Tae Moo and his secretary Cha Sung Hoon (Kim Min Kyu) are just as fantastic.

The two couples are also pretty darn cute, and that kiss remains one of the best in recent years in terms of swoon-worthy execution! 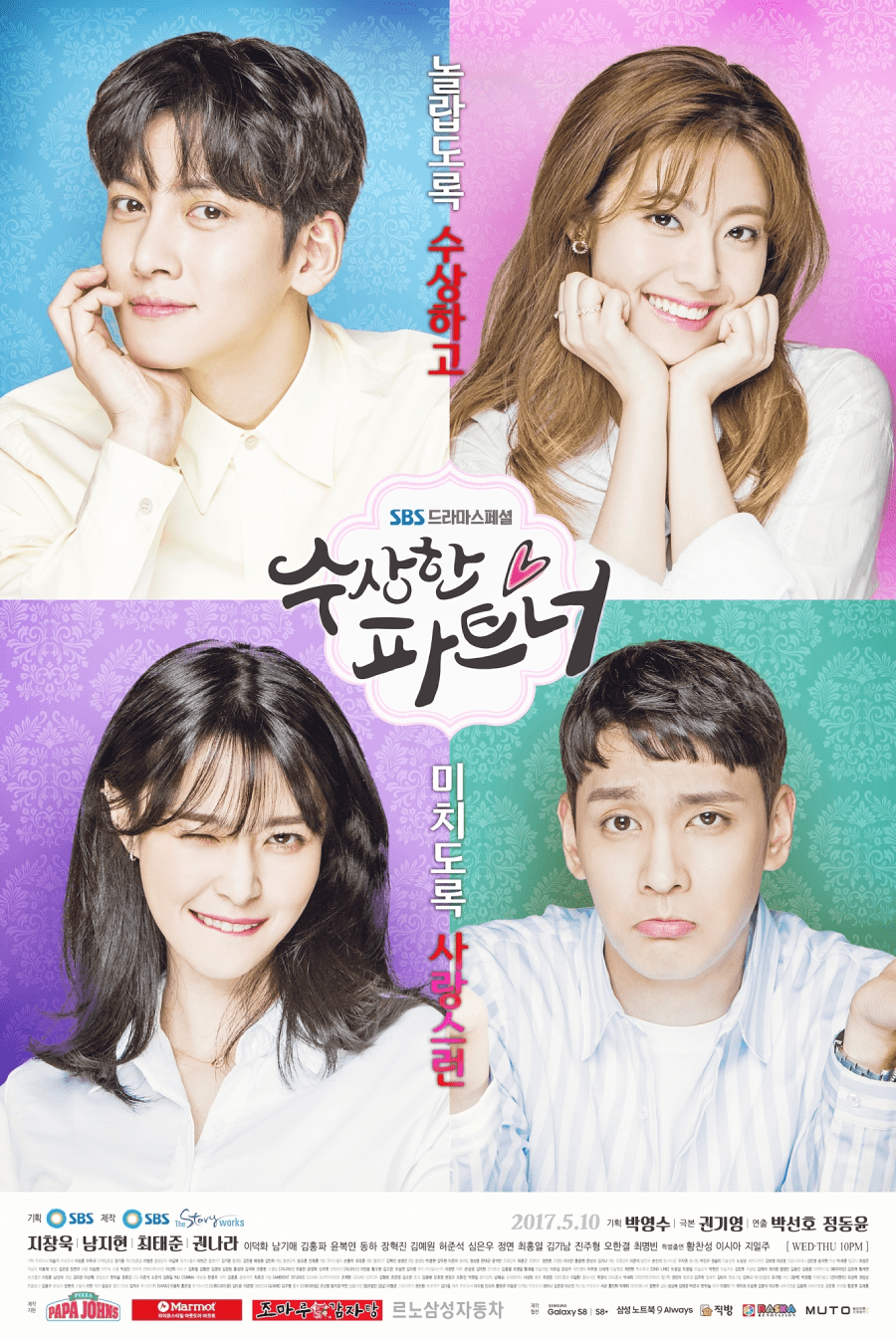 What happens when your boss suddenly becomes your prosecutor? Nam Bong Hee (Nam Ji Hyun) is an intern at the justice department with a steady boyfriend who also works at the same place. Bong Hee’s a go-getter who thinks that she’s finally got it made and just needs to prepare for marriage. That is, until she catches her boyfriend cheating on her with a sunbae at the same workplace.

Devastated, she confronts him and vows to sleep with the next man she bumps into, which happens to be prosecutor Noh Ji Wook (Ji Chang Wook). Feeling bad for her, he agrees to her proposition but really just has a drink with her and watches over her that night. An embarrassed Bong Hee flees the next morning, only to find that she’s been assigned to Ji Wook’s office. The two butt heads in matters of work but evolve to grudgingly like each other until Bong Hee’s ex is found dead in her apartment.

Despite being the prosecutor on Bong Hee’s case, Ji Wook vows to prove her innocence. But the real murderer is out there, and he’s just getting started.

Despite the whole murder mystery, this show is actually a lighthearted, genuinely fun rom-com. Ji Wook and Bong Hee are a delight, and the supporting cast, including the always wonderful Lee Deok Hwa, Kwon Nara, and the newly-married Choi Tae Joon, is excellent. Plus the chemistry is just off the charts!

Hey, Soompiers! Which of these shows interest you the most? And which ones have you already seen? Let us know your thoughts in the comments below!

Shalini_A is a long time Asian-drama addict. When not watching dramas, she works as a lawyer, fangirls over Ji Sung, and attempts to write the greatest fantasy romance of all time. Follow her on Twitter and Instagram, and feel free to ask her anything!