Hyoyeon, Kim Heechul, And Soyou Get Honest About Difficulties Of Dating For Idols, Fights They’ve Had With Bandmates, And More

On the July 5 broadcast of SBS’s “Dolsing Fourmen,” Girls’ Generation’s Hyoyeon, Super Junior’s Kim Heechul, and former SISTAR member Soyou appeared as guests. As these stars are 16, 18, and 13 years into their idol careers, respectively, they openly spoke about prejudice in the industry, rumors, and more. 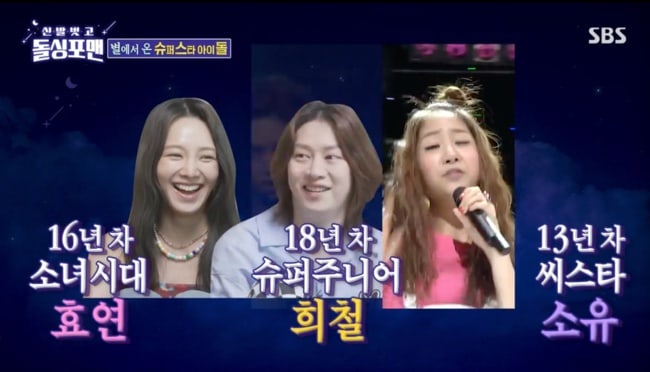 Kim Heechul explained that living as an idol was uncomfortable in various ways, because idols are not expected to date publicly, have fights or poor relationships with their bandmates, and only upload positive content to social media.

Kim Heechul elaborated, “I debuted when I was 23 years old [by Korean reckoning]. I revealed on a variety show that I first dated an older woman I met at a night club when I was 22 years old. But none of that was in the broadcast,” revealing that his agency SM Entertainment had cut it.

Since Kim Heechul was always sulking, he revealed that he complained to SM’s founder Lee Soo Man about not wanting to fake a personality for broadcasts, and Lee Soo Man understood Kim Heechul’s desire to be honest. As a result, Kim Heechul hilariously shared that on the next show he went on, he openly spoke about his dating experiences, first kiss, and past girlfriends.

Soyou chimed in to the dating discourse as she commented, “People think that when we go overseas for K-pop concerts like KCON, we are able to date because [the idol groups] all stay in the same hotel. However, the floors that girls and guys use are different. Each floor also has separate security guards.”

However, Hyoyeon explained that in those situations, you can use AirDrop, a wireless communication function to transfer files across Apple devices, to spy on others. As AirDrop only works with people who are nearby, Hyoyeon shared, “When you turn on Airdrop, you can see if there’s a guy on the girls’ floor. My manager told me about this and they’ve actually caught someone with this.” She added with a big smile, “I’m going to go try it when I go to our SM concert.” 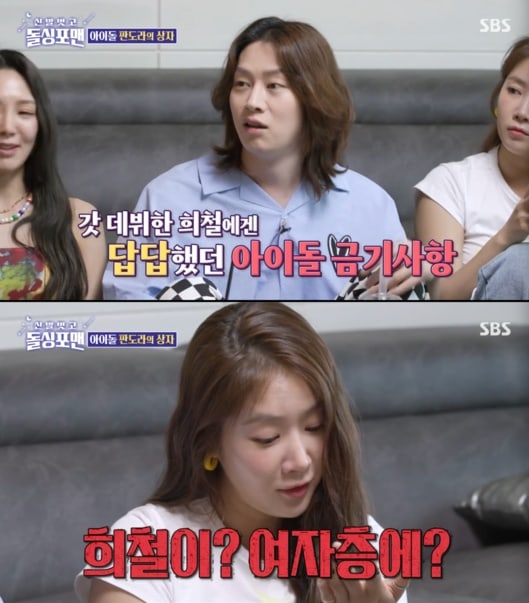 These certain “rules” forced onto idols have also caused unnecessary rumors, which Soyou touched on. She said, “Since SISTAR’s image was strong at the beginning, there were all sorts of stories. Tips were sent to our agency about us buying cigarettes at the convenience store or hanging out with men at bars. Since my agency was calling me to confirm, I just didn’t leave the house. I ate chicken feet by myself.”

They also spoke about fights with their bandmates, which is not a common topic for idols to talk about. Hyoyeon shared, “The Girls’ Generation members have never fought. Since I’m sensitive, I argued with Taeyeon when we first debuted.” Kim Heechul asked, “Didn’t you fight and not argue?” Hyoyeon made everyone laugh as she awkwardly replied, “We didn’t fight with ur fists.” 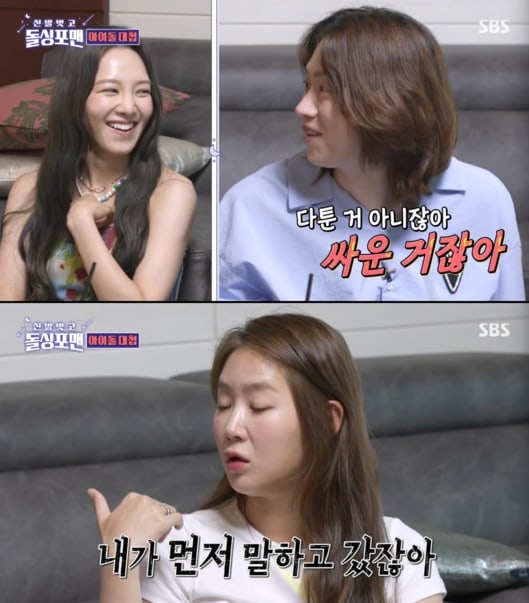 Soyou also described a fight she once had with Bora, saying, “It was a misunderstanding. Before Bora came in, I chose my outfit and was doing my hair for it. But when I came back from the bathroom, [Bora] was wearing the outfit. But her perspective was that she didn’t know.”

She continued, “I couldn’t tell her to take it off. I was a bit annoyed, so I decided to get some air. But just then, the wind blew so hard that the door slammed. Since I was in a bad mood, I couldn’t open the door again and tell them that I didn’t intentionally slam it. When I returned from the bathroom, Bora said, ‘Soyou, regardless of the situation, isn’t it wrong for you to slam the door like that? If you want, you just wear this,” allowing Soyou to explain her side and resolve the misunderstanding.

This past April, Soyou released her first solo mini album “Day & Night.” Currently, Super Junior is preparing to make their comeback with “The Road: Keep on Going” on July 12, while Girls’ Generation is also making a full-group comeback for their 15th anniversary in August.